Mines can be dangerous and frightening places: dark, wet, and thousands of feet below ground. Often, an elevator or two services hundreds of personnel on multiple levels, hundreds of feet apart or more. Communications are typically accomplished using portable radios which leverage a cabled system known as leaky feeder, or a wireless mesh system, which relies on line-of-sight.

However, these systems are extremely vulnerable to accidents. In the event of an emergency, such as an explosion or roof fall, resulting in the failure of traditional day-to-day communications trapped miners and rescue teams need access to back up communications.

Our products can also support text-messaging so miners can keep their self-rescuer on while communicating with rescue teams, and integrate with existing communications systems such as radios. 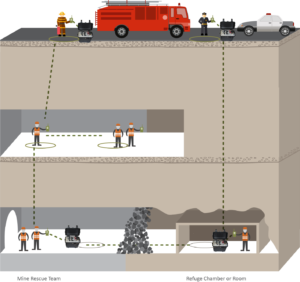