In subway tunnels, track level communications have been undertaken in much the same way for many years – flag signalling and line-of-sight radios are used to communicate and maintain the safety of work crews on rail tracks, and a cabled leaky feeder is typically employed for operational communications.

During maintenance, watch-people rely on coloured lights, flags, and hand gestures to communicate with both oncoming trains and work crews. Radios are typically used only for communication with control personnel, rather than between crew members themselves. If at any time a crew member’s radio fails, or the watch-person’s gestures are unclear, the train must stop and the crew must exit the track.

There are also any number of emergency situations that could disrupt standard leaky-feeder communications in a subway or other transportation system, including: construction mishap, power outage, natural disaster, bombing, electrical fire, arson, or chemical attack.

Vital Alert can not only provide portable TTE communication for ongoing maintenance and repair operations, but also a redundant, independent emergency communication system available to transit authorities above and below ground as well as the public in stations or trains along the system. 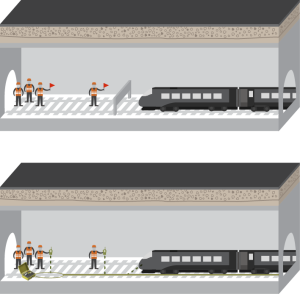