In high traffic locations such as major airports, stadiums, hospitals, school campuses, museums and government buildings, the importance of effective communication increases exponentially in a crisis.

Emergencies such as a terrorist attack or natural disaster may destroy infrastructure supporting operational communications. They may also cause a cellular network overload in which service is significantly degraded or fails altogether.

Facilities and First Responders need a viable means of communicating safety information to their own personnel as well as the public.

Vital Alert can provide a one-way path of communication to personal communications devices during emergencies via integration with a Wi-Fi/Pico-cell. 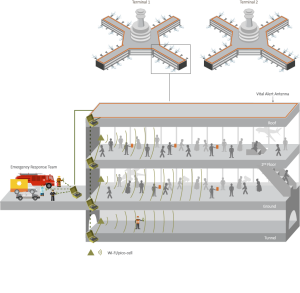