Autonomous vehicles use many types of sensors to navigate, including satellite-based GPS signals and cellular signals.

In dense urban environments, satellite signals are blocked by tall buildings, and are unavailable or inaccurate.

Cellular signals are affected by multipath reflection from surrounding buildings and also inaccurate.

Another navigation system is necessary for dense urban environments such as urban intersections, tunnels and underpasses.

Waldo was developed for Toyota ITS (Intelligent Transportation System) as part of Japan’s commitment to “smart cities” and autonomous vehicles.

The system reports the vehicle and pedestrian identity, position, direction and speed every 100 milliseconds and this information is integrated into the traffic management, signage and collision avoidance systems.

Waldo is a critical component of the autonomous vehicle future. 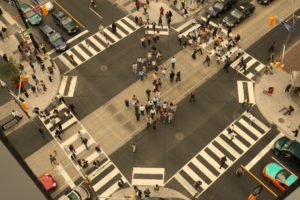